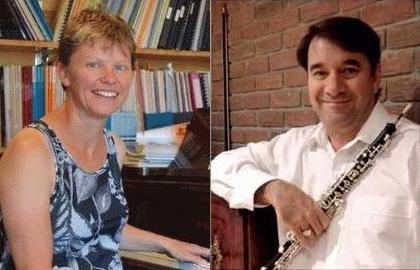 Lynette has been Hobart-based pianist, teacher, examiner and accompanist for the past 20 years. She holds a Bachelor of Music, a Masters of Music, a Bachelor of Teaching and the A.Mus.A and L.Mus.A diplomas in piano performance.

Lynette is a regular concert performer and chamber musician and has appeared several times with Virtuosi Tasmania, most recently performing the world premiere of a composition by Tasmanian composer Don Kay with fellow musicians David Nuttall and Phillip Jouglin. Amongst many of their concert appearances Lynette has performed on ABC FM’s Sunday Live programme with violist Janet Rutherford. Lynette, Janet and Helen Thomson recently performed the world premiere of the song cycle “Dark River” composed by Ralph Middenway.

Lynette is a piano teacher and accompanist at The Friends’ School and also runs a busy and thriving piano teaching studio in New Town.

David Nuttall has been the Principal Oboist of the Tasmanian Symphony Orchestra since 2007. Prior to this he held the positions of Associate Professor at the Australian National University, where he was a member of the internationally acclaimed wind quintet, the Canberra Wind Soloists, and Associate Principal Oboist of the Melbourne Symphony Orchestra. He was also a core member of the Australian Chamber Orchestra. David has recorded a number of cds for ABC Classics and Tall Poppies and has been a soloist with most of Australia’s symphony orchestras. He particularly loves helping young people to learn.