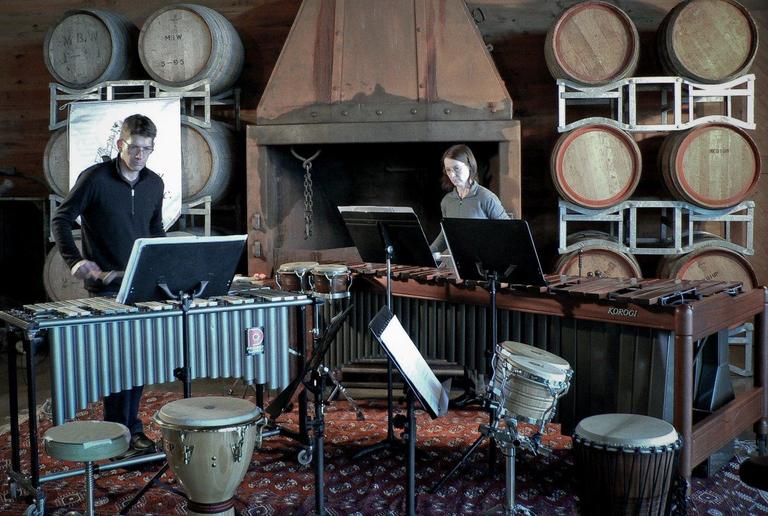 Matt and Tracey were members of the Melbourne-based percussion quartet Woof! which presented its own concert series in Melbourne and was part of the Musica Viva in Schools programme in Victoria. In 1999 Woof! recorded a CD of the Tuneful Percussion Works of Percy Grainger. They have been performing together as Mattra Percussion Duo since 2000.

Mattra has performed for Virtuosi Tasmania and on ABC Classic FM's "Sunday Live" as well as many other recitals which have included premieres of duo percussion works by international and local composers. Mattra's repertoire primarily comprises music for vibraphone and marimba as well as works for untuned percussion instruments.

Matthew Goddard was born and bred in Hobart where he started his musical life as a drummer before moving to Melbourne where he studied percussion and timpani at the Victorian College of the Arts. He worked regularly with the Melbourne Symphony and was a founding member of the percussion quartet Woof! In 1998 Matt worked in Japan as Guest Timpanist and Percussionist with the Orchestra Ensemble Kanazawa before returning to Tasmania in 1999 to take up his current position as Principal Timpanist with the Tasmanian Symphony Orchestra. He also performs with Tracey Patten in the percussion duo, MATTRA.

Tracey Patten started playing percussion in her school band in Adelaide and then the Combined South Australian Schools Percussion Ensemble and South Australian Youth Orchestra. Upon completing a Bachelor of Music in Percussion at the Elder Conservatorium she moved to Melbourne to complete Honours at the Victorian College of the Arts where she was awarded the Willem Van Otterloo Orchestral Scholarship which enabled her to complete an Advanced Diploma at the Sweelinck Conservatorium in Amsterdam.
When she returned to Australia she continued to freelance with many ensembles, including the Melbourne and Tasmanian Symphony Orchestras and Orchestra Victoria. Since moving to Hobart in 2000, Tracey has continued to work with these orchestras and teaches at The Friends' School and with the Tasmanian Education Department.