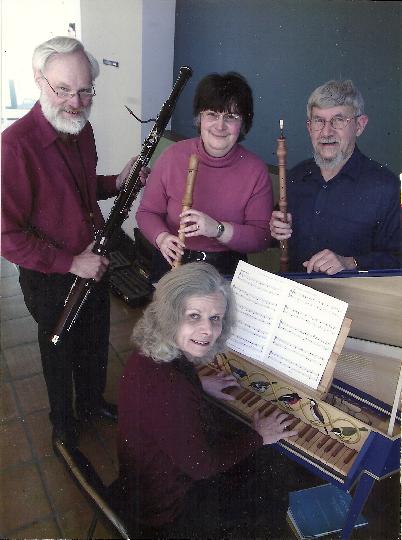 Alan began his career with degrees in Chemistry. He joined the Tasmanian Symphony Orchestra as an oboist. Alan retired recently after 25 years, and now pursues his other musical passion, the bassoon.

Llewellyn has played recorder and piano for many years. She has also played viola and guitar, but the recorder remains her favourite. She studied music at Sydney University and is a Senior Lecturer and Head of Art Theory at the Tasmanian School of Art.

Don studied as an oboist at the NSW Conservatorium, and has also played most other woodwinds and some brass. He has worked in many aspects of the musical world, including orchestral oboist, army musician and bandmaster, and instrument repairer. Don presently devotes his time to recorder and oboe making.

Victoria was three times state winner in the piano section of the ABC Concerto and Vocal competitions. She studied in Hobart, and at Zurich and Basel in Switzerland. Victoria taught at the Tasmanian Conservatorium of Music from 1974 – 1998. Victoria now teaches privately, and is active as a soloist, accompanist, and chamber music player.