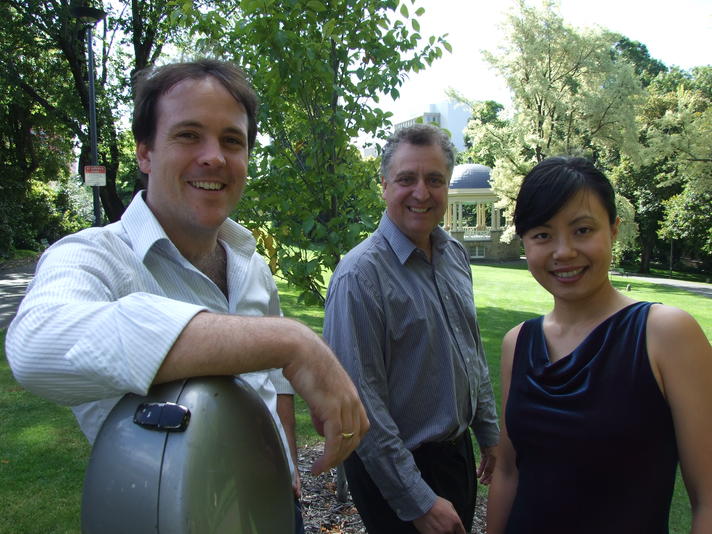 A concert to celebrate the acquisition of a small concert grand piano for the Kettering Hall, introduced by Christopher Lawrence.

Trio Tasman was formed in 2010. Shan Deng (piano), Jeremy Williams (violin) and Patrick Murphy (cello) are all lecturers at the Conservatorium of Music, University of Tasmania. The performers musical backgrounds are diverse, ranging from members of the Nash Ensemble, Tankstream Quartet, Australian String Quartet, Grainger Quartet and prize for the Best Australian pianist at the Sydney International Piano Competition.

Trio Tasman is committed to bringing chamber music to a wide community audience, performing at venues in Tasmania including, Epsom House, Home Hill Winery and the Conservatorium of Music. In June 2010 the trio gave a performance of Beethoven's Archduke trio for the ABC Classic FM "Sunday Live" series at the historic Theatre Royal, Hobart.

In 2011, the trio will tour Hong Kong, Macau and China as part of the University of Tasmania culture exchange programme.

Patrick's award-winning career combines a passion for music education with an impressive history as a cellist. He was a founding member of the Tankstream Quartet (now Australian String Quartet) who were the winners of the 2002 Osaka International Chamber Music Competition, the 2nd National Chamber Music Competition in Melbourne 2001, and third prize and audience prize at the 2003 Melbourne International Chamber Music Competition. He was also the cellist of the Grainger Quartet, the Whitely Trio and Nexus-2MBS Virtuosi and has toured with the Australian String Quartet. He has performed extensively with the Sydney Symphony Orchestra and the Australian Opera and Ballet Orchestra. Patrick has toured throughout Europe, Japan and Canada, where he was an Artist in Residence at the Banff Centre for the Arts with the Halcyon Quartet. He is currently a member of the White Halo Ensemble and the Southern Cross Soloists, and directs the Chamber Strings program in the Sound Thinking Summer Music Program in Brisbane.

Winner of the Sydney International Piano Competition’s Best Australian Pianist Prize, Shan Deng is a well known Australian-Chinese pianist now working in Hobart. Her successes include winning the keyboard final of the ABC Young Performer of the year award, and representing the Arts as a national finalist in the Young Australian of the Year competition. Shan has also received Churchill and Fulbright fellowships to travel and study in the USA and South Africa.
Shan’s early music studies were undertaken in the gifted children’s program at the Central Conservatory of Music in Beijing. Studying with Leah Horwitz, she obtained her Bachelor of Music at Queensland Conservatorium Griffith University with first class honours and a university medal. Shan then completed a Master of Music, with a scholarship at Manhattan School of Music, where she studied under Professor Phillip Kawin.
Concert demands have taken Shan around the world, and she has performed in Australia, Asia, the USA, South Africa and Europe. She has toured overseas as a soloist with the Queensland Philharmonic Orchestra, and has appeared with all the Australian Symphony Orchestras. Shan has been featured in numerous Australian, Chinese and South African radio and television programs.
In 2001 Shan accepted an appointment at Conservatorium of Music, University of Tasmania, where she is currently Lecturer in Piano and co-ordinator of the keyboard department. Shan is in demand around the world as a concert artist, teacher and adjudicator.