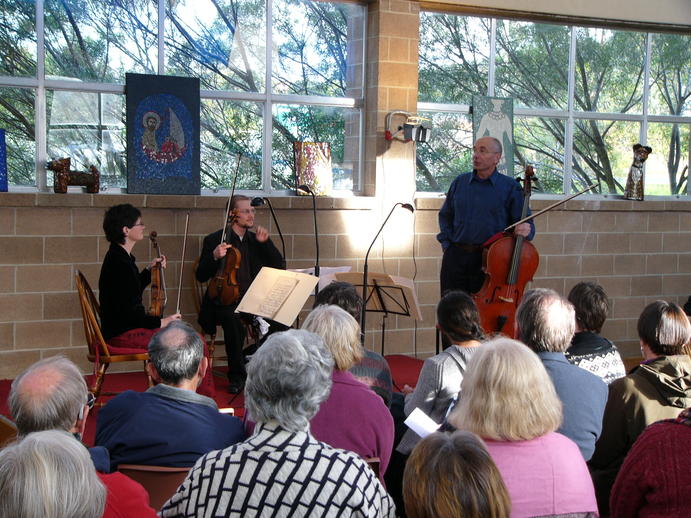 Rachel Bremner completed her violin studies with Professor Jan Sedivka at the Tasmanian Conservatorium, has been a regular player with the TSO, and regularly appears as a recitalist and chamber musician. Rachel has toured nationally with Musica Viva, and has been extensively involved in chamber music and broadcasting, playing with Geoffrey Lancaster, David Bollard and Christian Wojtowicz. She has also performed and broadcast Australian music for violin by Gillian Whitehead, Keith Humble and Don Kay. She was associated on a number of occasions with the new music ensemble Pipeline, directed by Professor Simone de Haan. Rachel has also passed on her experience to younger musicians at music camps and chamber music classes at the Tasmanian Conservatorium and the Mt. Buller Chamber Music School in association with the Australian String Quartet. Rachel now resides at Oyster Cove.

William studied with Jan Sedivka at the UTas Conservatory of Music, and has performed causally with the TSO. He is about to take up a fellowship to study overseas.

Christian Wojtowicz studied cello at the Tasmanian Conservatorium before gaining a Churchill Fellowship to work with Pierre Fournier in Zurich and later with Andre Navarra at the Paris Conservatoire. He freelanced extensively in France and the UK before appointment as principal cello in the Melbourne Elizabethan Trust Orchestra. His wide experience in Australia includes principal cellist of the TSO and guest principal in most Australian Symphony Orchestras and the Tasmanian Symphony Chamber Players, which he co-founded. As well as regular recitals, he has made concerto appearances and recordings with all Australia's leading orchestras. Christian has held teaching positions at the Canberra School of Music, Queensland Conservatorium and University or Queensland, University of Melbourne and Victorian College of the Arts. Christian now lives at Oyster Cove.